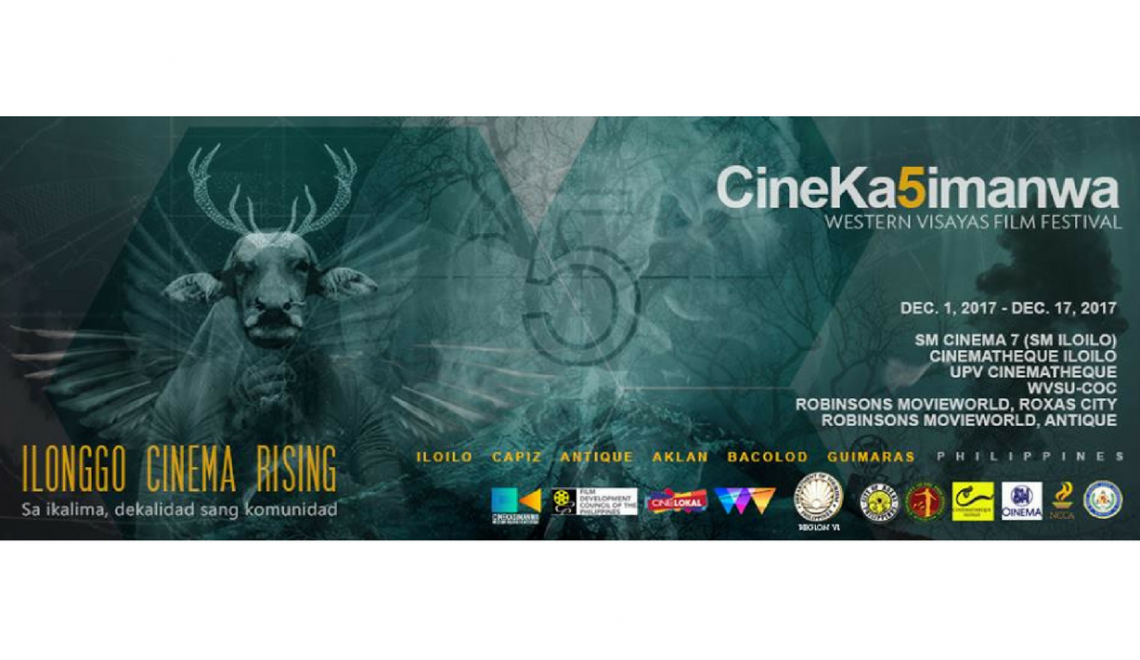 Ilonggo Cinema is rising. Our filmmakers have been winning in major national festivals and are selected in international festivals. Director Tara Illenberger’s most recent major win in ToFarm Film Festival 2017 proves our point. Filmmaker TM Malones is one of Cinemalaya’s finalists this year and was also a finalist in Cinema One last year. The same filmmaker won last year in an international film festival. Filmmaker Reymundo Salao’s film is a finalist at FACINE 24 in San Francisco, USA, competing with Ilonggo filmmaker and CineKasimanwa’s Festival Director, Elvert Bañares. These are just but a few records made by Ilonggo filmmakers in 2017.

CineKasimanwa: Western Visayas Film Festival, now in its fifth year, was able to make significant and historical contributions to the enrichment and rise of filmmaking in the region during the last five years. And CineKasimanwa has been making records since it started. 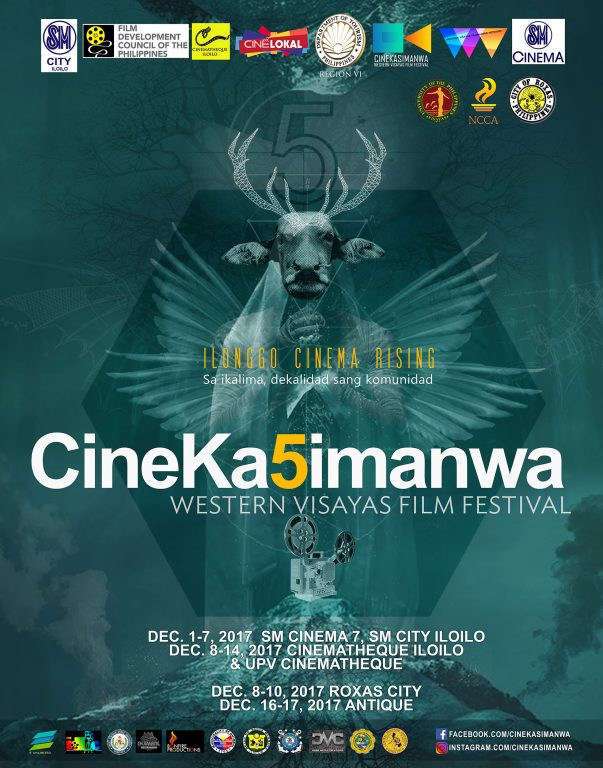 During its second year only, it rose up to become the number one regional film festival in terms of number of films produced locally, year-round audience attendance, number of venues, number of satellite screenings and outreach programs.

Between 2013 to 2016, CineKasimanwa has world-premiered more than 300 short films from Aklan, Antique, Capiz, Iloilo, Guimaras and Negros Occidental. Year after year, it was able to make more than 100% increase in submissions from its previous year. This, together with increased audience attendance in four major film venues, makes CineKasimanwa a significant figure in generating new films and/or multimedia works rooted on Western Visayas culture. This year alone, we saw an increase of 304% percent in submissions.

Become your own storyteller and blogger!
GET MY FREE EBOOK

Ilonggo Cinema is currently one of the most active in the country and one that needs to be sustained in the next years for one major reason: Western Visayas is a haven rich in cultural heritage with beautiful and colorful stories – still untapped. As it now faces massive development and as it positions itself as a highly-urbanized city, Iloilo and its Western Visayas neighbors have so many valuable cultural icons, literary works and a rich heritage of Ati and Panay Bukidnon IPs.

CineKasimanwa: What’s in store for the 5th edition?

On its fifth edition (by now the longest-running film festival the region ever had), CineKasimanwa wants to be slimmer in terms of programming to focus on quality works. Our tagline this year (2017): “DEKALIDAD SANG KOMUNIDAD” (quality of the community).

There are two main sections (from among the ten) this year: The Western Visayas Film Grants Program which has eight “Centerpiece Selections” is the first regional short film grants program in the country which is produced by CineKasimanwa and Department of Tourism – Region VI and presented by FDCP and CineLokal; and the Student Competitions presented by FDCP. 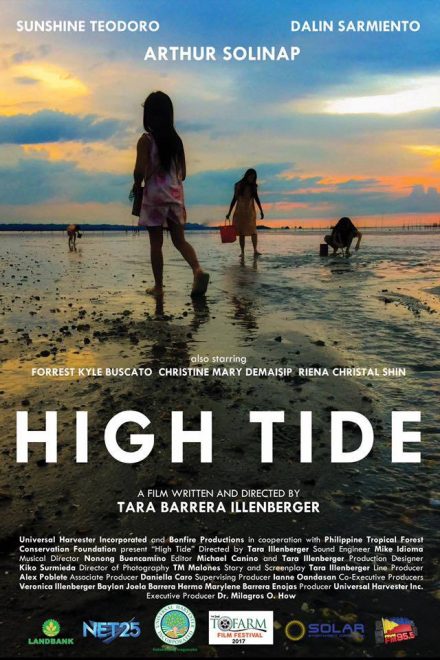 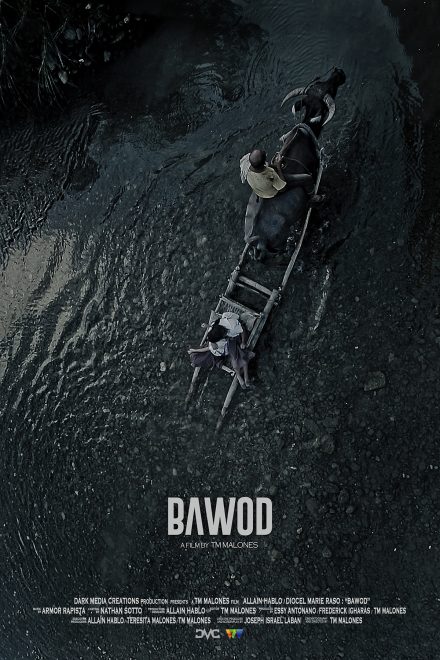 In the Student Competition, CineKasimanwa has received more than 90 plus submissions which will be trimmed down to ten finalists. The Student Competition is an inter-school film contest wherein students submit their film to win prizes and shall be Western Visayas’ official film representative to the FDCP National Inter-School Film Competition next year.

The fifth edition kicks off at SM Cinema 7 with Tara Illenberge’s “High Tide” and TM Malones’ “Bawod” – both award-winners – on Dec. 1, 2017, 6:00pm. The festival will stay with SM Cinema 7 until Dec. 7, 2017 which shall culminate with an awards night and an FDCP Filmmakers Night Party. FDCP Chair Liza Diño will be the Very Special Guest of the Awards Night. 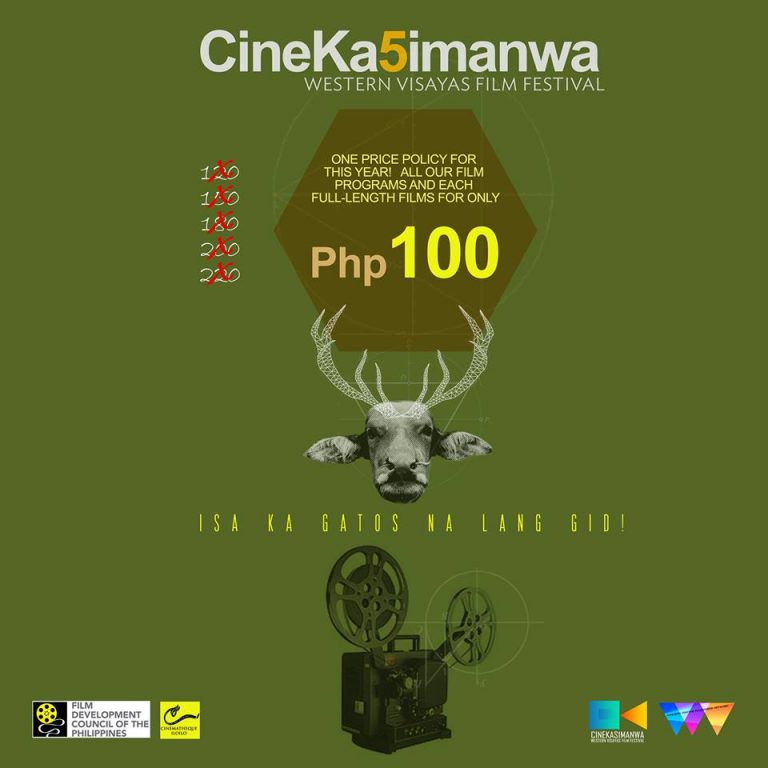 This year, after a series of film production workshops, CineKasimanwa, NCCA and FDCP present the Film Literacy Workshops with two of the country’s top film scholars: Mr. Tito Valiente, member of the Manunuri Ng Pelikulang Pilipino, the top critics’ group giving out the Gawad Urian and Prof. Patrick Campos. The film literacy workshops will be held at UPV Cinematheque and Cinematheque Iloilo. 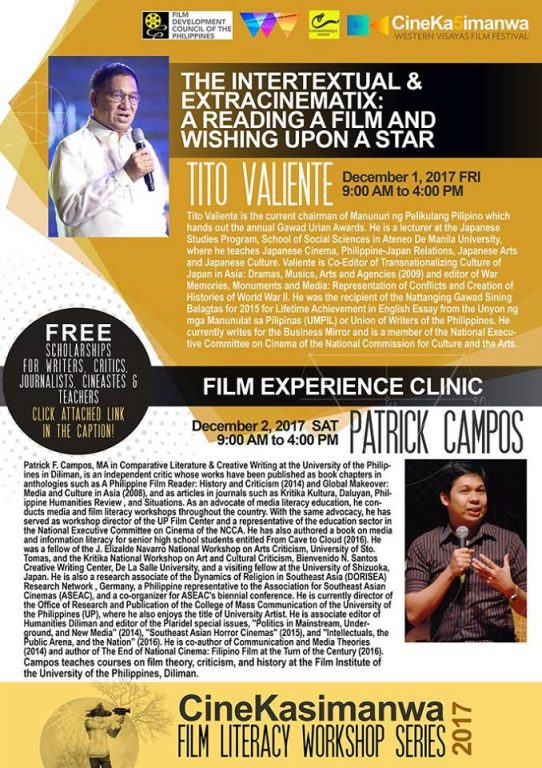 CineKasimanwa and the future of Ilonggo Cinema

As we brace ourselves for quality harvests, we want to develop a culture of cinema that we want to be proud of. Our belief is that Western Visayas is not just a destination but a region full of experiences, stories, cultures that deserves to be told through film. After all, films are a reflection of us. Our stories. Our vision. Our dreams. Our challenges. Our lamentations. Our fantasies. Our fears. Our hopes. Most importantly, Our lives as proud Ilonggos.