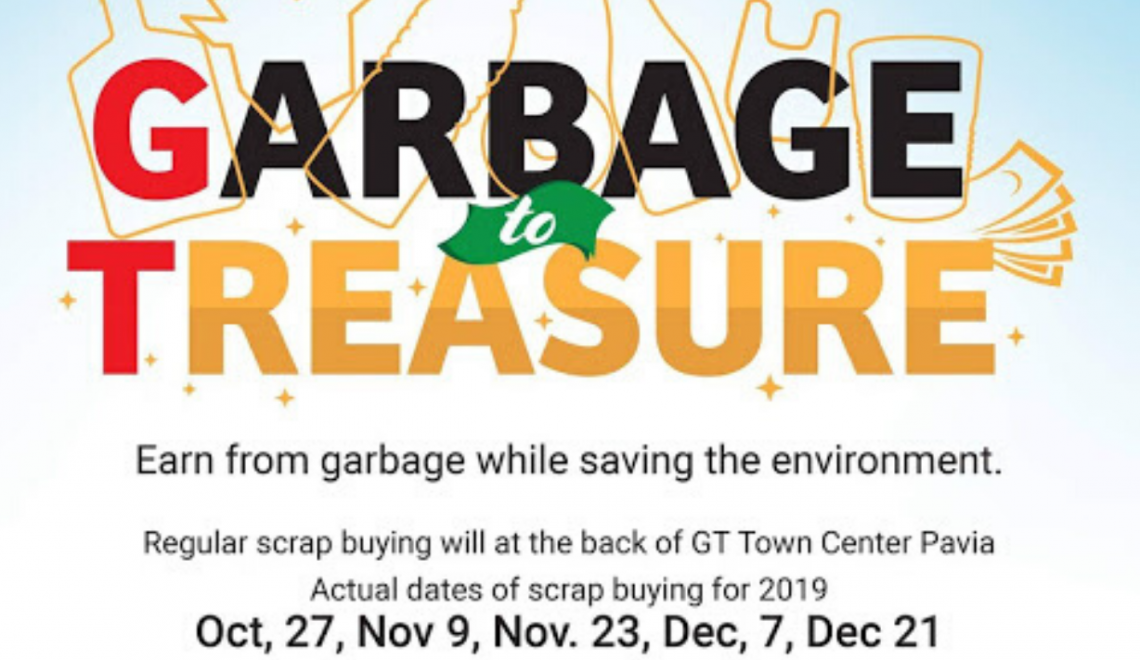 Dubbed as “Garbage to Treasure”, the said initiative was officially launched at the GT Town Center Pavia on October 26.

“Garbage to Treasure” is a brainchild of GT Town Center’s Vice President for Real Estate and Land Development Allan Ryan Tan who is an advocate of environmental preservation through proper waste disposal.

“I am geared towards the preservation of the environment ever since. I always practice waste segregation. In fact, I built my own compost pit at home. With the global environmental problem that we are facing at present, I think it’s high time that we involve the community,” said Tan. 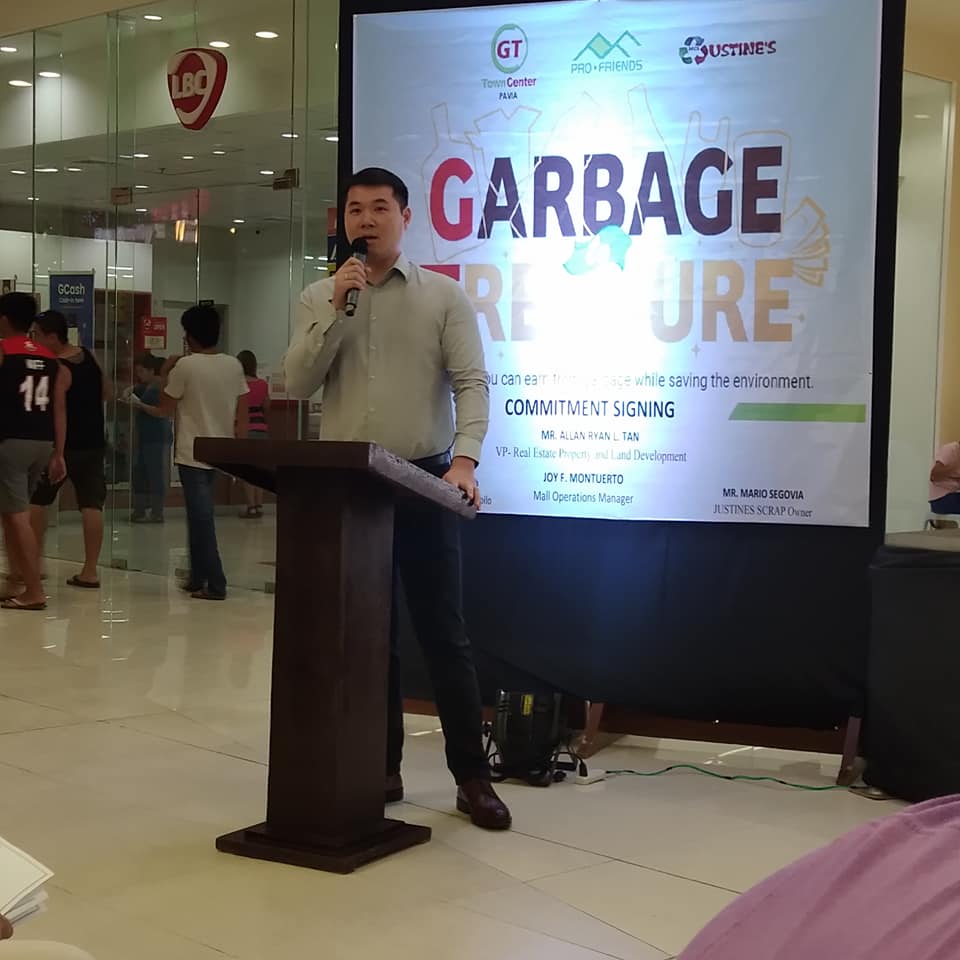 GT Town Center VP Allan Ryan Tan is an advocate of environmental preservation, and he wants to involve the community in this Garbage to Treasure initiative.“We are piloting this initiative by partnering with PRO-FRIENDS which is the closest community to our mall. With this, we hope to encourage the homeowners of Parc Regency Residences and Monticello Villas and eventually influence the community to practice proper waste disposal,” he added.

On his part, PRO-FRIENDS Iloilo Strategic Marketing Brand Manager Jerome Garcia highlighted that this project is timely with the pressing environmental issues in the country nowadays.

“This initiative will truly benefit not just our homeowners at Parc Regency Residences and Monticello Villas, but the llonggo community as a whole. As we build homes and accessible communities for the Ilonggos, it is also part of our responsibility to protect the environment,” he said.

“Garbage to Treasure” is an opportunity for everyone to convert their waste into money by simply bringing it to GT Town Center Pavia every other Saturday (October 27, November 9, November 23, December 7, December 21) from 8AM to 2PM at GT Town Center Pavia’s Parking Area. The public can bring recyclable garbage such as paper, empty bottles, scrap iron, tin cans, GI sheets, aluminum, copper, batteries, pet bottles, plastic containers and cellophane. 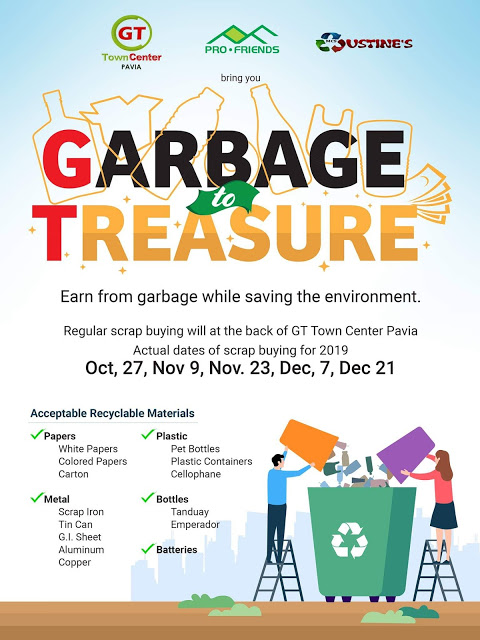 These trashes will be sold to the garbage collector per kilo. The prices of the garbage will depend on the kind of material. Thus, the public are reminded to have their trash segregated before bringing it to scrap buying area.

With this initiative, GT Town Center Pavia and Profriends management hopes to lessen the problems on waste disposal at the same time,help the people earn money by doing this simple act of saving the environment. 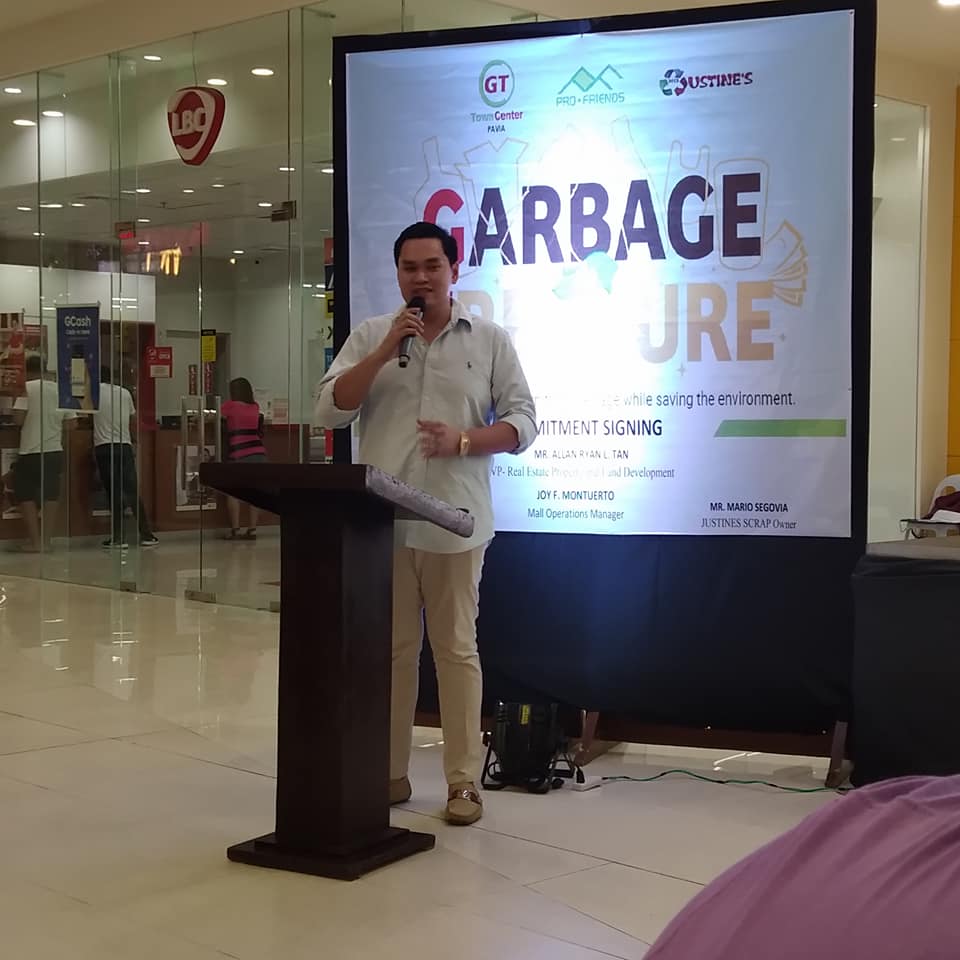 Aside from GT Town Center Pavia and Profriends also partnered with the local government of Pavia and the Department of Environment and Natural Resources (DENR) in order to intensify the impact of the project.

Other than “Garbage to Treasure”, GT Town Center Pavia has also other sustainable environmental projects and initiatives on its pipeline as part of its thrust of becoming a “Green Town”. Among those include the installation of its solar panels and the holding of the “Sunday Market” for the local entrepreneurs and farmers.

GT Town Center Pavia is serving the nearby areas. Tenants of the mall are mostly local and home-grown entrepreneurs. GT offers everything one needs: a supermarket, a department store, an appliance store, electronics and mobile phones, a medical and diagnostic center, fashion and jewelry stores, party needs, printing shops, restaurants and cafes, spas and salons, pharmacies, optical shops, and government services (SSS, LTO, Pag Ibig, NBI, etc). Nearby towns and areas are actually served and there is no longer any need to go to the city for one’s needs.